Most Important, Other categories, World Superbike
July 7, 2018 by Alessandro Palma
0

Federico Caricasulo wants to win again after 2017 Buriram Round and his home race weekend at Misano is a huge opportunity for him. Meanwhile, the rider from Ravenna secured his first pole position in 2018.

“Carica” took first place in the early stages of Superpole 2 and finally he performed a lap in 1’37.694 few minutes before the chequered flag. This way, the GRT Yamaha Italian went back to pole position after a two-year break, following 2016 Misano Round.

Reigning World Champion Lucas Mahias will close second row, while the third one will be opened by wildcard Stefano Valtulini ahead of Kyle Smith and Hikari Okubo. 10th place for Anthony West, in front of Sheridan Morais and other wildcard entry Marco Bussolotti scatteranno dalla quarta fila. Okubo and Morais went through Superpole 1.

In conclusion, the best ESS rider is once again Eemeli Lahti. The only Suzuki rider in Supersport and in the whole SBK paddock will start 19th. 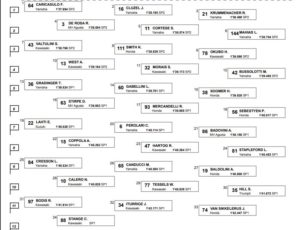 Supersport: 25 riders expected on the grid for 2019 season