After a wet FP1, the second Free Practice session of European Superstock 1000 in Motorland Aragon took place on a dry track and in much better conditions and it’s Markus Reiterberger who set the pace. The three times German Superbike Champion leads the FP standings after one lap in 1’53.068 and thanks to this laptime “Reiti” managed to beat Roberto Tamburini, second after staying in the pits during FP1.

Maximilian Scheib was leading the way in the early stages of the session, but finally the Aprilia rider from Chile finished third in front of Florian Marino and the rookie Jan Bühn, Reiterberger’s team.mate in alpha Racing – Van Zon – BMW Team. Behind the German rider we find five italians from the 6th till the 10th place: Federico Sandi, Alessandro Delbianco, Luca Vitali (who crashed at Turn 5 after half of the session), Alessandro Andreozzi e Riccardo Russo. 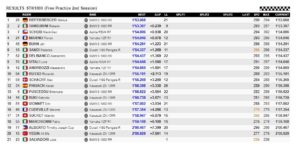 MotoGP, Aragón: Marc Marquez wins, the title is just behind the corner

Moto2, Aragón: Second success of the season for Brad Binder