At Brno Superstock 1000 FP1 was affected by the rain fallen in early morning and the standings were topped by Aprilia wildcard rider Andrea Mantovani. But later the track got drier and drier and so the riders could push at their hardest during Friday afternoon’s FP2.

As the conditions were normal again, the rider who finished in front of the rest is, as usual, Markus Reiterberger. The alpha Racing-Van Zon-BMW rider went first during the early stages with a lap in 2’01.853. With just 10 minutes (out of 30) to go he went even faster till reaching 2’01.670 and this laptime allowed him to close Friday FPs in first place. 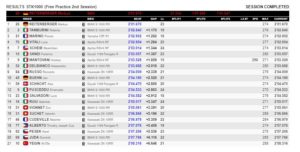